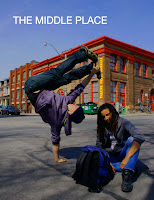 Help Fill The House for Youth Without Shelter!
This coming Wednesday, October 27, a special benefit performance of The Middle Place is taking place at Theatre Passe Muraille. All proceeds are going to YWS Shelter in Rexdale - the shelter where Andrew conducted all the original interviews.
The Middle Place began in 2007 when a young, idealistic playwright accompanied Project: Humanity into the shelter system to do on-camera interviews with the residents of a Rexdale youth shelter. That playwright Andrew Kushnir,  conducted a series of on-camera interviews with the shelter’s residents and workers; these transcribed interviews became the script for The Middle Place, which is currently showing at Theatre Passe Muraille.  With four actors creating sixteen residents and three workers, along with a fifth actor playing Kushnir himself, The Middle Place is a compelling, relevant piece of Canadian theatre that exposes an often forgotten faction of Toronto’s residents.The Middle Place is verbatim theatre at its best.

This is a performance we really want to sell out. If you're planning to catch the piece this Fall, this is the perfect opportunity to do so - by simply buying a ticket, you'll be assisting the at-risk youth who made this play possible. Tickets are only $30 and your dollars are going to an extraordinary organization. For tickets visit call Arts Box Office at (416)504-7529 or purchase online
Posted by Mary at 11:53 AM No comments:

GTA event: HAT meeting, Advocating for the Homeless and the Poor, Nov. 13

Cathy Crowe is a nurse, educator and activist, advocating for the homeless and the poor in the areas of housing, public health and social justice. She has degrees in nursing and education from Ryerson and OISE, and has received honorary degrees from the University of Victoria and McMaster University. She also received the Atkinson Charitable Foundation Economic Justice Award in 2004. Cathy is the author of Dying for a Home: Homeless Activists Speak Out.   This presentation is free and open to all.
Posted by Mary at 10:03 PM No comments:

The 6th semi-annual Munk Debate will feature practicing Catholic and former British Prime Minister Tony Blair debating bestselling author and atheist Christopher Hitchens. These two world-class debaters will tackle the resolution: be it resolved, religion is a force for good in the world.

The debate will focus on competing claims regarding religion’s effect on human civilization, today and into the future. For example: In a world of globalization and rapid social change does religion provide the common values and ethical foundations that diverse societies need to thrive in the 21st century? Or, do deeply held religious beliefs promote intolerance, exacerbate ethnic divisions, and impede social progress in developing and developed nations alike?
Posted by Mary at 12:42 PM No comments:

UofT Event: How Nanotechnology Will Affect the Environment – In a Good Way

St. George Woodsworth College
119 St. George Street
Rm. WW 121Oct 20, 4 - 6 pm
ABSTRACT: Nano means small, and nanotechnology is the science of the small. Nanoparticles are very small particles - on the order of 1/10000th the width of a human hair. Because they are so small, they have many new properties that we can use to make useful products. These properties can include control over their interaction with light (absorbing it or letting it through), or increases in surface area per unit mass, which makes them more catalytically active, or changes in their interaction with their environment, which make them better for drug delivery or environmental remediation. In this talk, I will discuss some upcoming applications of nanotechnology that have the potential to dramatically impact the environment - in a good way. In particular, I will discuss nanotechnology applications in solar energy generation, energy efficiency, catalysis, and in agriculture.

BRIEF BIO: Darren Anderson, Ph.D. was the founding President of Vive Nano. During the early stages of the company’s growth, he was responsible for initial financing, drafting and filing of patent applications, and the creation of Vive Nano’s first product lines. Dr. Anderson currently oversees all technical direction at the company, including product development, strategic direction, and intellectual property.
Posted by Mary at 10:47 AM No comments:

This seminar will be recorded and archived for later viewing.
Posted by Mary at 10:40 AM No comments:

Melissa Upreti is Senior Regional Manager and Legal Adviser for Asia in the International Legal Program. She is coordinator and main editor of two of the Center's signature publications, Women of the World, South Asia, and Women of the World, East and Southeast Asia. She led a fact-finding mission to investigate women imprisoned for abortion in Nepal and is coauthor of Abortion in Nepal: Women Imprisoned. She has designed and conducted human rights trainings in India, Nepal, and the Philippines and is involved in reproductive rights litigation projects in those countries. More recently, she was instrumental in securing the constitutional recognition of reproductive rights in Nepal and has been involved in efforts to promote the use of the Optional Protocol to CEDAW in the region. Prior to joining the Center in 2000, she was a Program Officer at the Asia Foundation in Nepal. She has a LLB from India and received her Master of Laws from the Columbia University School of Law, where she was a Stone Scholar.

Her presentation will focus on the human rights dimensions of maternal mortality and morbidity and legal strategies being used in India, the country with the highest number of maternal deaths in the world, to hold the government accountable for its failure to prevent pregnancy related deaths and injuries. In June, 2010, the Delhi High Court issued a groundbreaking decision recognizing the right to health as an inalienable right, particularly the right of women to pregnancy related care. The decision addresses the Indian government's failure to ensure that entitlements and benefits introduced by the state to prevent maternal deaths and disability are indeed implemented. It recognizes the right of pregnant women who are denied maternal health care and benefits to obtain compensation. Above all, it reaffirms the important connection between the right to health and the right to food as constitutionally protected fundamental rights.

Note: If you are interested in the practical uses of CEDAW in building case law, this is a good example. Mary

Sisters and Brothers in Solidarity is asking that everyone come together -- both women and men working in solidarity -- to honour our over 500 missing and murdered sisters, mothers, daughters, aunties and friends by taking a stand. We say: Enough is Enough.

First Nations communities across Canada have been carrying the burden of this sadness for generations as they have walked this trail of grief. They are stepping out of the shadows and coming forward. We demand that these murders and the disappearances stop. Now.

The Walk for Justice starts at 5:00 pm at Queen's Park and we will participate in a healing walk ending at Allen Gardens for a candlelight vigil at 7:00 pm. Sisters and Brothers in Solidarity is a really grassroots group and we get our guidance from the protocols, traditions and the seven teachings.

We are asking everyone to bring a drum with them to participate in our Heart Beat walk (joining our heart beat with that of Mother Earth) and a strip of white cloth.
Contact Lisa: l.currier@hotmail.com
Posted by Mary at 8:15 PM No comments:

On Saturday eve RabbleTV is livestreaming a lecture by Georgina Byer As the first openly transgender person in the world to hold a national office, Georgina Byer was elected a Member of Parliament in New Zealand.

As the first openly transgender person in the world to hold a national office, Georgina Byer was elected a Member of Parliament in New Zealand. Beyer, born biologically male, spent her early childhood on her grandparents' farm in rural New Zealand before moving to Wellington with her mother and stepfather. From an early age, Beyer recalls feeling like a girl trapped in a boy's body. In her 20s, Beyer began working in the Wellington gay nightclub scene as a singer and drag queen performer. During a trip to Australia, she was attacked and raped by four men. Beyer refers to this experience as her defining moment. In 1984, she had sex reassignment surgery and forged a successful career as a film and television actress in Auckland. From Auckland, Beyer moved to the small conservative town of Carterton, where she took a job as a youth social worker.

In 1993, Beyer was elected to the Carterton District Council. Two years later she was elected Mayor of Carterton, where she served for five years. In 1999, she won a seat in the New Zealand Parliament. While in Parliament, Beyer helped pass the Prostitution Reform Act, which decriminalizes prostitution and protects sex workers and their clients. She was instrumental in securing same-sex civil union benefits for New Zealanders. Beyer chronicled her life in "Change for the Better: the Story of Georgina Beyer" (1999). A documentary film about her, "Georgie Girl" (2002), won international awards. Beyer was a keynote speaker at the International Conference on LGBT Human Rights in Montreal in 2006. She retired from Parliament in 2007, saying, "I can now look for fresh challenges."
Posted by Mary at 8:12 PM No comments:

Labels: Event, lgbtq, Online
Newer Posts Older Posts Home
Subscribe to: Posts (Atom)
This is an informal blog by the UofT Humanist Chaplains, for University of Toronto Secular, Ethical, and Humanist students and scholars, alumni, faculty and staff. We welcome comments and interaction, and you can also contact us by phone and email: see the MEET US page at the top.