The Real Face Of Jesus - What Did Jesus Look Like?

The Real Face Of Jesus - What Did Jesus Look Like? - Popular Mechanics Thanks to Kevin S on Facebook for this interesting article 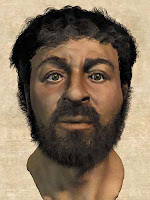 "...While Western imagery is dominant, in other parts of the world Jesus) is often shown as black, Arab or Hispanic." And so the fundamental question remains: What did Jesus look like?

An answer has emerged from an exciting new field of science: forensic anthropology. Using methods similar to those police have developed to solve crimes, British scientists, assisted by Israeli archeologists, have re-created what they believe is the most accurate image of the most famous face in human history.

An outgrowth of physical anthropology, forensic anthropology uses cultural and archeological data as well as physical and biological sciences to study different groups of people, explains A. Midori Albert, a professor of forensic anthropology at the University of North Carolina at Wilmington. Experts in this specialized field require a working knowledge of genetics, and human growth and development. In their research they also draw from the fields of primatology, paleoanthropology (the study of primate and human evolution) and human osteology (the study of the skeleton). Even seemingly distant fields like nutrition, dentistry and climate adaptation play a role in this type of investigation.

While forensic anthropology is usually used to solve crimes, Richard Neave, a medical artist retired from The University of Manchester in England, realized it also could shed light on the appearance of Jesus. The co-author of Making Faces: Using Forensic And Archaeological Evidence, Neave had ventured in controversial areas before. Over the past two decades, he had reconstructed dozens of famous faces, including Philip II of Macedonia, the father of Alexander the Great, and King Midas of Phrygia. If anyone could create an accurate portrait of Jesus, it would be Neave.

Matthew's description of the events in Gethsemane offers an obvious clue to the face of Jesus. It is clear that his features were typical of Galilean Semites of his era. And so the first step for Neave and his research team was to acquire skulls from near Jerusalem, the region where Jesus lived and preached. Semite skulls of this type had previously been found by Israeli archeology experts, who shared them with Neave.

With three well-preserved specimens from the time of Jesus in hand, Neave used computerized tomography to create X-ray "slices" of the skulls, thus revealing minute details about each one's structure. Special computer programs then evaluated reams of information about known measurements of the thickness of soft tissue at key areas on human faces. This made it possible to re-create the muscles and skin overlying a representative Semite skull.

The entire process was accomplished using software that verified the results with anthropological data. From this data, the researchers built a digital 3D reconstruction of the face. Next, they created a cast of the skull. Layers of clay matching the thickness of facial tissues specified by the computer program were then applied, along with simulated skin. The nose, lips and eyelids were then modeled to follow the shape determined by the underlying muscles....(read more at link above)
Posted by Mary at 7:19 PM