In Ancient Wisdom, Modern World, the Dalai Lama clearlydifferentiates
spirituality and spiritual from religiosity and religious. He says,
"Spirituality I take to be concerned with those qualities of the human
spirit — such as love and compassion, patience, tolerance, forgiveness,
contentment, a sense of responsibility, a sense of harmony — which bring
happiness to both self and others."
He concludes by observing that there is no reason why an individual
should not develop such qualities without recourse to any religious
belief. Twenty-first century secular humanists who define their movement
as a philosophical and ethical stance that emphasises the value and
agency of human beings and generally prefers critical thinking over
established faith, couldn't have said it better.

For them too, the overarching feeling is a sense of awe, wonder and mystery — being inspired by the natural world or human achievement, along with the belief that one's inner resources provide the ability to rise above everyday experience.

Under the circumstances, doctrinal imperatives become unnecessary. But humanism has also come underscathing criticism by 20th-century intellectuals who considered it to be either sentimental "slop" or overly feminine and wanted to go back to a more manly society.

Yet, all the humanist credo maintains is that the ultimate goal is human flourishing: making life better for allhumans and, as the most conscious species, also promoting concern for the welfare of other living beings. The Dalai Lama, Jainism or Buddhists — all say the same thing.
Posted by Mary at 10:31 PM No comments:

But there remains the question of whether humanism is in fact a
religion, or something more like a religion than it is like any other
sort of social movement. This is complicated because of the way in which
“religion” has become a toxic brand. But if we go back to the science, I
think the answer is clearly that it is. Emile Durkheim,
who pretty much founded the scientific study of religion, defined it as
“a unified set of beliefs and practices relative to sacred things, that
is to say, things set apart and surrounded by prohibitions – beliefs
and practices that unite its adherents in a single moral community
called a church”.

So, can you have religions without a church?
Humanism almost qualifies. It sacralises humanity, claiming for us a
significance that is not to be derived from either biology or physics.
Organised humanism clearly has unified beliefs and practices. It even
has the world’s most lugubrious and sentimental hymn: John Lennon’s
Imagine. Like all modern religions it has universalist aspirations,
claiming to explain the lives of non-believers better than they can do
so themselves. It can inspire heroism and self-sacrifice, but also be
used to legitimise intolerance – see Sam Harris and his friends.

So
the real question is how it can fit into a world of competing
universalist religions. This is hard, and lots of humanists will not
think it worth the effort. Bringing sacred values such as human rights
and democracy into dialogue threatens their sacredness, and even when
they survive the process it is hard to give up the privilege of being
their authoritative interpreter.

But there are some humanists who take dialogue seriously. I talked to Babu Goginieni,
now the international director of the movement, who was relaxed about
theology: “The enemies of humanism are not only on the religious side,”
he said. “I think the government has no business taking up any side.
Atheism is not important. I happen to be an atheist, but that’s not the
point – what is important is freedom and human values, and a way of
living with others and with nature. Once we have concluded there is no
God, we move on.”
Posted by Mary at 10:12 PM No comments:

My Weekend at the World Humanist Congress, Oxford, UK

The World Humanist Congress 2014 brought together humanists from across the world to discuss freedom of speech and freedom of conscience. The conference was held at the University of Oxford, whose motto “Veritas Liberabit, Bonitas Regnabit”  (the truth will set you free, goodness will reign), could have been a secondary theme to the event.

Delegates and speakers came from every corner of the planet, with a common goal of strengthening thinking, reason, and respecting freedom of thought and expression.  Much was said regarding the various threats that exist in our world that we must be aware of in order to combat a back sliding of universal human rights.   When I was a chaplain student working in social justice causes, I could not have stated these valuesmore clearly, more precisely, or more sincerely then was expressed last
weekend in Oxford.


There were speakers such as Gualai Ismail (@Gualai_Ismail) founder of Aware Girls, author
Taslima Nasreen (@taslimanasreen), Bangladeshi blogger, Asif Mohiuddin (@IAMAsifM) and so many more.  They all exhibited their individual strengths, while consistently echoing the values and goals of humanism. 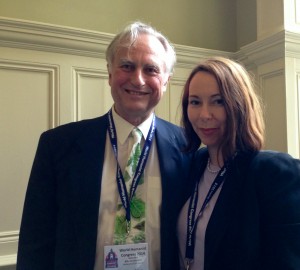 It was truly a privilege to speak at this Congress.  I also had an opportunity to connect with Richard Dawkins about his role in helping to found the Clergy Project, and to thank him publicly for his efforts, articulating just how large of an impact his efforts have had on my life and other members of the Project.

I must thank Andrew Copson, the Chief Executive of the British Humanist Association for the tremendous job of operating this Congress, Sonja Eggericks, President of the IHEU for her leadership of the International Humanist and Ethical Union which represents the values of humanism on
the world stage, and the tremendous humanists with whom I gratefully shared this weekend. 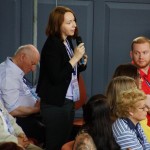 Humanism in spotlight (From Oxford Mail)

Scientist and prominent advocate of atheism Professor Richard Dawkins spoke at a humanist congress yesterday.
Humanism is the belief that values and ethics come from rational thought – and not from supernatural beings.
Prof Dawkins gave a talk entitled The Greatest Show on Earth, outlining the key points behind the scientific theory of evolution. The New College fellow is the vice president of the British Humanist Association and an alumni of Balliol College.
The talk was held in Blackwell’s bookshop as part of the World Humanist Congress 2014.
Posted by Mary at 10:59 PM No comments:

A panel of five judges ruled on Friday that the speaker of parliament acted illegally when she allowed a vote on the measure despite at least three objections that not enough MPs were in attendance.
"The speaker was obliged to ensure that there was quorum," the court said in its ruling. "We come to the conclusion that she acted illegally."

While celebrating the ruling, activists warned that homosexuality remains a criminal offence in the east African country under colonial-era laws. The fiercely controversial statute represented a dramatic toughening of the penalties. It banned the "promotion of homosexuality" and enabled life sentences to be imposed for various same-sex acts, including touching in public or living in a same-sex marriage...

Homophobia is widespread in the socially conservative country, where American evangelical Christian groups have been accused of fuelling prejudice. The legislation was seen as a political ploy by Museveni to shore up support before elections in 2016, which will be his 30th year in power. The court's intervention allows him to blame others for its defeat while also placating western donors, who were reluctant to punish a military ally.

Outspoken anti-gay preacher Martin Ssempa had suggested that the petition was being pushed to mend Uganda's international reputation before Museveni travels to Washington next week to meet Obama at a
landmark US-Africa summit. "There are efforts … to drum up a legal precedent to try to show [Washington] that, 'Hey, we are not that bad on homosexuality,'"

Labels: homophobia, lgbtq, Uganda
Newer Posts Older Posts Home
Subscribe to: Posts (Atom)
This is an informal blog by the UofT Humanist Chaplains, for University of Toronto Secular, Ethical, and Humanist students and scholars, alumni, faculty and staff. We welcome comments and interaction, and you can also contact us by phone and email: see the MEET US page at the top.